Okay… I warn you in advance.  This is gonna be one looonggg post!  I have a lot to say – or rather a lot to show.  Look… think of this as a book.  A post that you can dip in and out of.  Like that bird thing that drank the water that Homer used to keep the Nuclear Power Plant running.  Just a tappin’ that key.  Ha ha!

I went to Liverpool.  I saw a lot of things, and I took a lot of pictures.  Some of these pictures will end up as band artwork so I may hold them back.  But I will try to reveal as much of interest as I can.

First things first.  I took the ferry across the Mersey.  Sing the song in your head whilst viewing the photos.  This ferry crossing gave me the first chance to see the Liver Building.  The Liver Building will be talked about in detail a little later.  It also enabled me to see the Port of Liverpool building from the water.  The Liverpool river front is certainly a captivating sight! 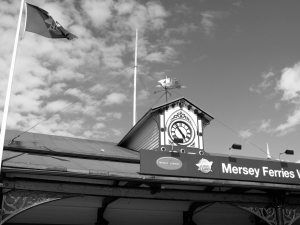 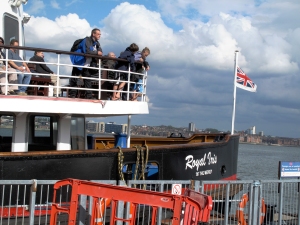 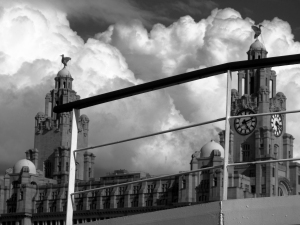 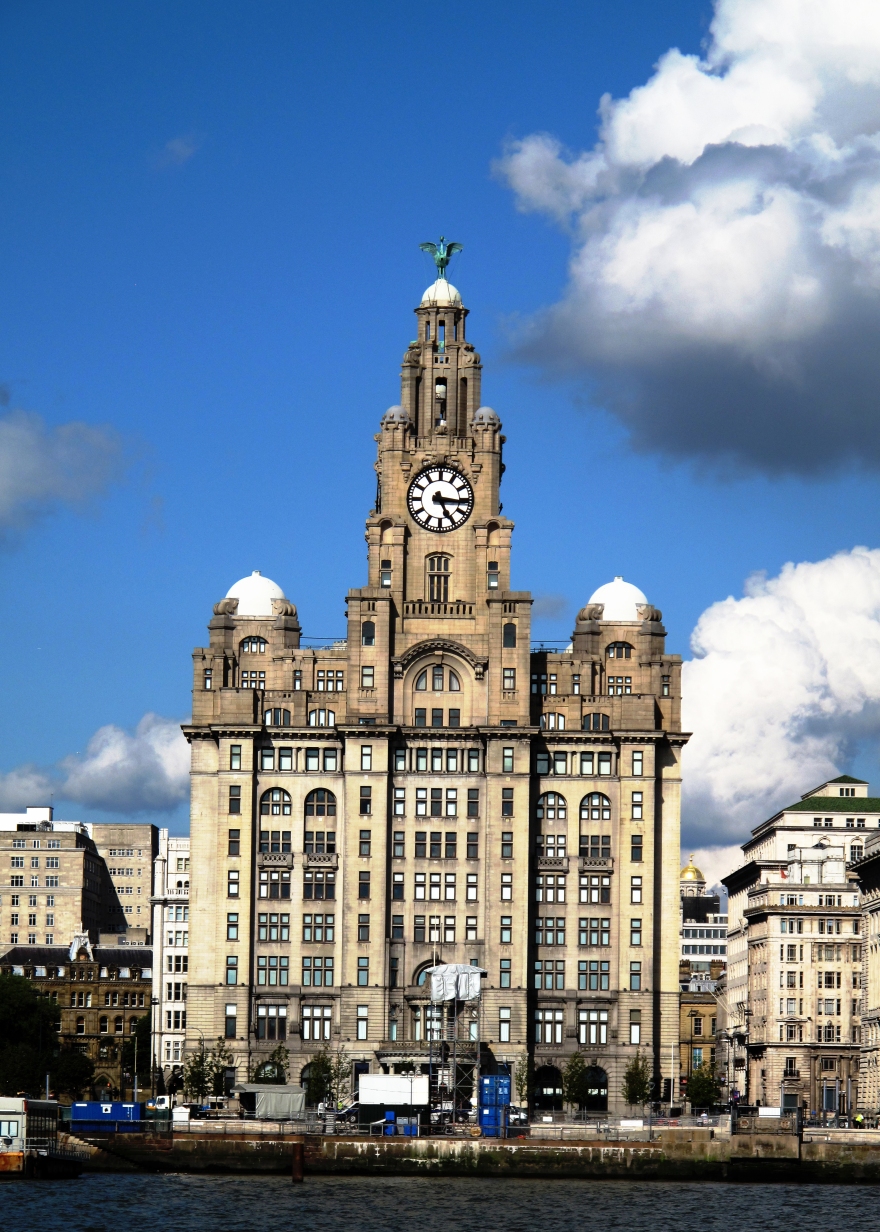 (note the huge cathedral in the 5th image… we’ll see more of that later!)

I visited Liverpool on the Centenary of the construction of its most famous building – the Liver Building.  This is one fantastic piece of architecture.  And to celebrate 100 years of its existence it was lit with a dazzling display of head spinning lights.  And I had the best view possible.  ‘Cause I was on the roof of the building opposite (a great Pan-Asian restaurant).  That restaurant was THE place to be in Liverpool that night.  The bouncers on the doors were working their asses off!

The Liver Building is the most amazing sight even without the light show.  Like the top of a sky scraper cut off.  Like you’ve cut the top off a boiled egg with a spoon.  And the building has two birds sitting on top of it.  The Liver birds.  There are many stories regarding how the birds came to be there and what they signify to the city – but safe to say, Liverpool would be in crisis if the birds were to fly away.

I just love this shot.  Reminds me of Ghostbusters!

This celebration also marked the opening of a new Museum dedicated to celebrating all things Liverpool.  I gotta say… I was not impressed with the museum.  I think they are gonna have to find a few things to actually put inside it.  At the moment it is just one HUGE empty staircase!!!

I filmed a short video to give an example of the light show.  It’s not exactly representative of actually being there.  But it gives you a flavour.  I particular liked the syncing of the sound to the light during the sequence played out on the museum building.  I know this kind of technology has been used before on famous buildings around the world.  But this was the first time I’ve seen such a thing… and it blew me away:

Anyway, like I said… superb light show.  And marking 100 years of an important British landmark.  And I was there!  Yippeee!!!!

I also entered the Port of Liverpool building.  Some great examples of extravagant architecture in this building.  Flourishes from a time when Britain ruled the world! 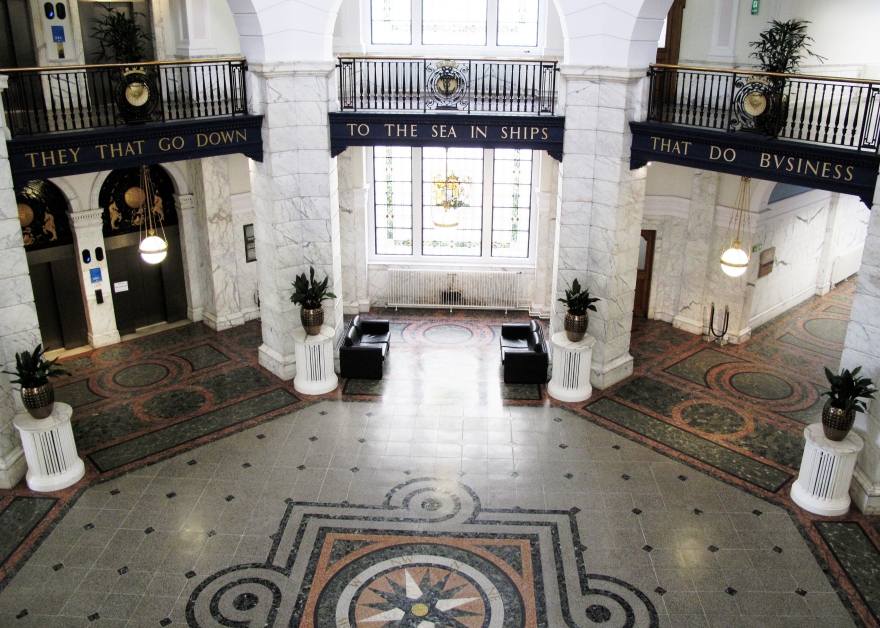 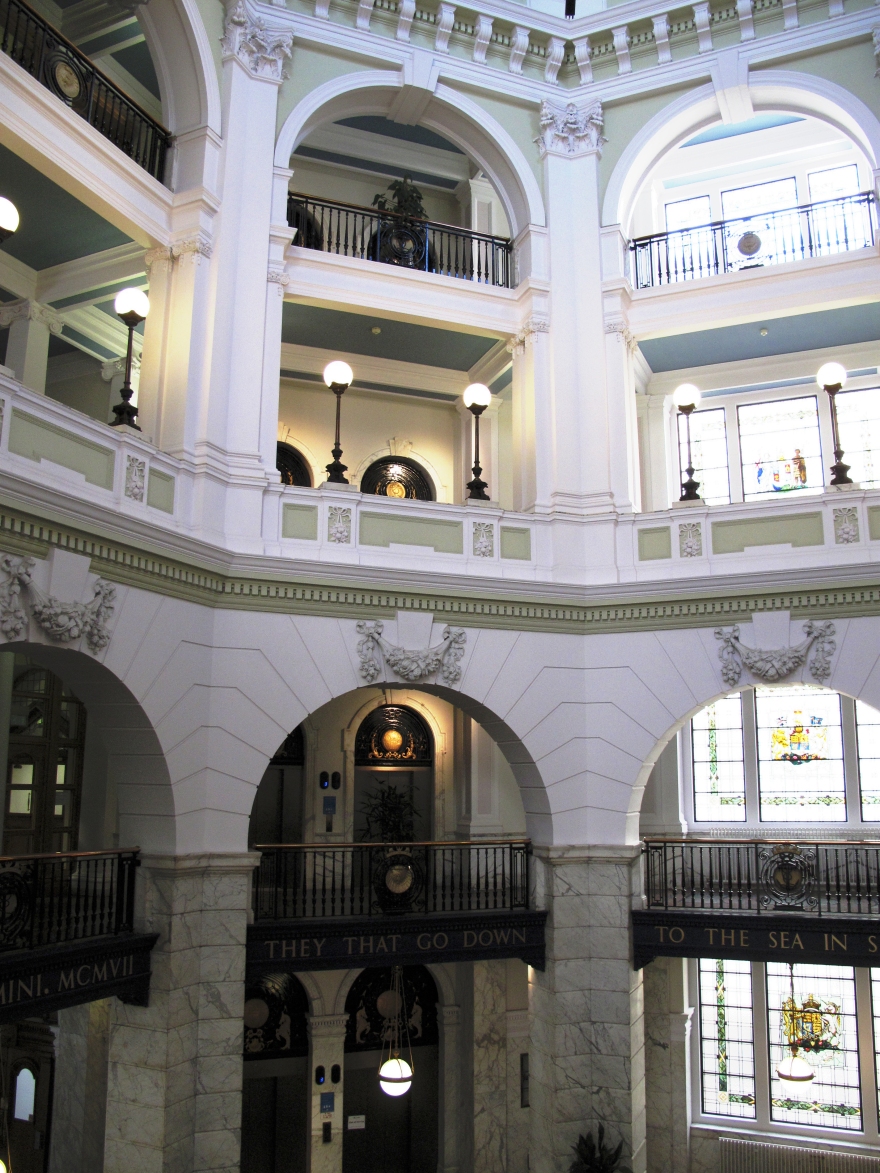 First thing the next morning I made my way to one of the most important buildings I have ever stepped into.  John Lennon’s childhood home:

The house is ‘by appointment only’ so the general tourists can only stand outside the gate.  At one point this was strange ’cause you have to understand that the house is just an ordinary looking house in an ordinary looking street.  So at one point I’m standing in the porch.  Now this is interesting to me as this was the porch that John and Paul used to hang out in with their guitars (Aunt Mimi wouldn’t let Paul in any further!).  So I’m standing there… basking in the ambience… when I look out the window to see 100 Japanese tourists taking pictures, of the house, of the porch, with my face looking out.  Hmmm… way to be famous!  Ha ha!

Seriously though… fantastic ambience.  You get a free reign of the house (after having your camera locked away!).  I stood in the small room where John would listen to the radio.  I stood in his bedroom.  I kind of felt the presence of a young John being rebellious in the house to the lodgers that Aunt Mimi would invariably accommodate.  For a fan like me… fantastic!

Although the house is ‘just’ a house… it has a certain aura.  It even featured on the cover of a single by Oasis – Live Forever (although they had the sense not to wear a Pac-Man T-shirt!)

So….hmmm… where to go after John Lennon’s childhood home?  Hmmmm… How about Paul McCartney’s? 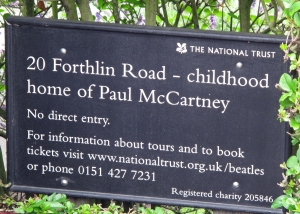 20 Forthlin Road is similar to Lennon’s house in that you have to book to get in.  It’s a terraced house in a typical street.  A little poorer that Lennon’s area.  Again, I have no photos from inside the house as they lock away all cameras.  The purpose of this is that there are unpublished photos and artefacts inside.  Although the ambience was slightly different to Lennon’s house, in many ways this is actually the more important of the two houses.  This is the house that a lot of the early Beatles songs were written.  I have photos of John and Paul writing songs in this house.  I have grown up with those photos – and finally I was able to stand in that living room and place one foot where I know Paul sat, and one where I knew John sat.  For a moment there I was literally standing in history.  For a Beatles fan like myself this is/was a huge deal.  Standing in Paul McCartney’s bedroom.  Seeing the drain pipe he climbed up to get into his room when the house was locked at night.  Most importantly though… to stand on the original tiles of the kitchen floor.  These tiles had been stood upon by all four Beatles.  Sent a shiver up my spine!!!

McCartney’s mother died a year after he moved into this house so it obviously holds mixed emotions for Paul.  He has never been back since he left.  But nevertheless… it makes an interesting pilgrimage for a Beatles fan!

Okay… here’s something I wasn’t going to do… but anyway.  Here’s a song I wrote inspired by the visits to those houses.  It is called “Last Night But Three“.  It will be the centrepiece of my next Confession of the Whole School album and this is a sneaky surprise just for my devoted fans (It won’t be available to anyone else until the release of the next album).  Why not press play and then read the rest of the article? 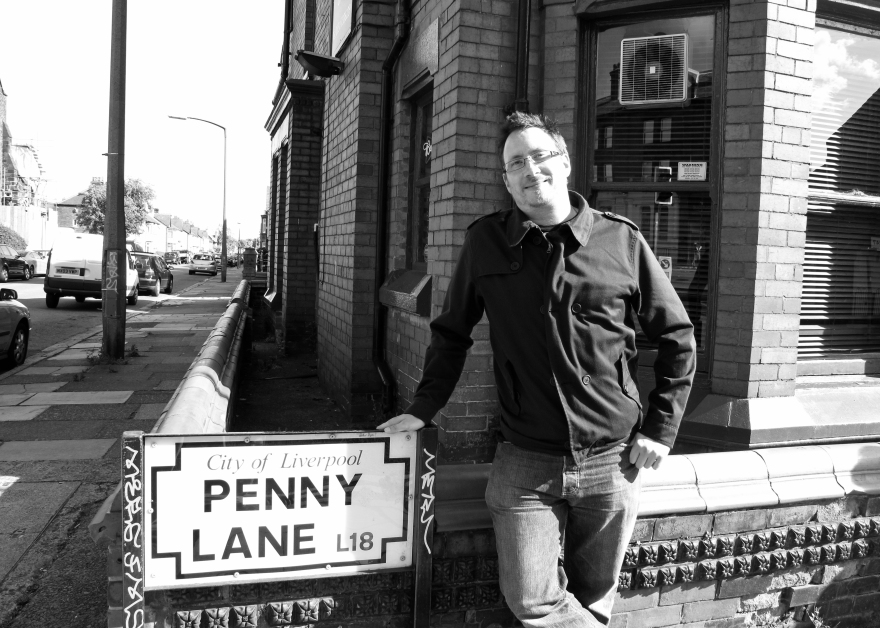 Penny Lane is a street that forms a junction not far from Lennon’s house.  At the time of the boys’ youth this would have been a very busy junction as it was next to a bus station.  The area is quite upmarket now and a barber shop is still there.  Other than that, this place probably holds more interest for me than anyone else. For your average person it’s probably just another street.

I hold McCartney and his Beatles-era songs (such as Penny Lane) in high regard.  He is a much maligned Beatle with most people forgetting that it was actually McCartney who was the experimenter.  It was McCartney who wove the tape loops and inspired the most psychedelic songs such as Tomorrow Never Knows.  It is McCartney who did not get murdered and therefore did not become a deity.  And it is McCartney who is our greatest living songwriter.

To take a break from the Beatles for a second I would like to show you a few photos I took at that huge Cathedral that we could see from the Mersey Ferry.

A breathtakingly big cathedral… I think my photos do it justice! 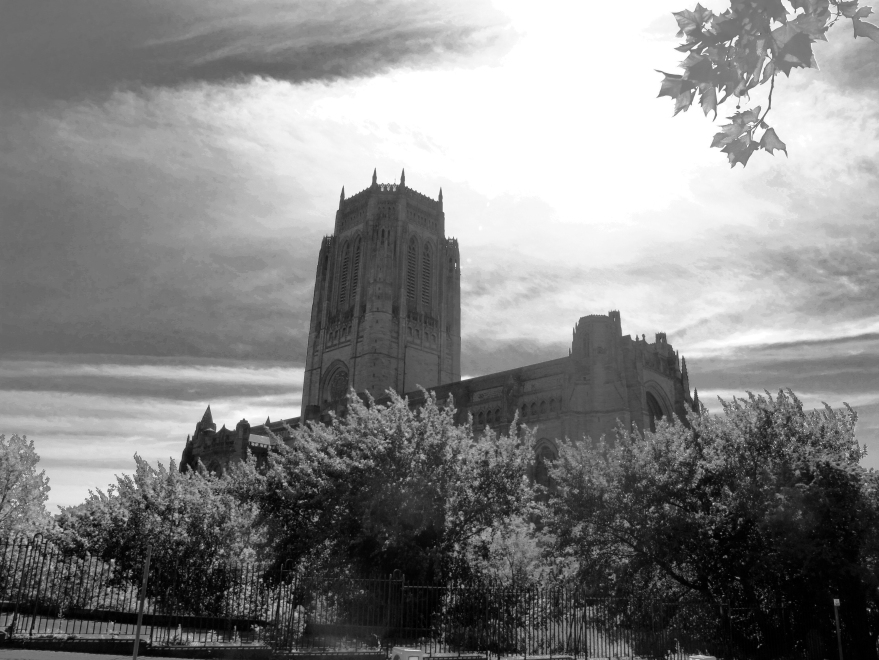 And the views from the top of this monumental building were incredible!!!

And a bomber just happened to fly past!

So… The Cavern Club… Possibly the most famous club in the world?  Everyone knows the story of how this iconic building was demolished right?  It was an underground club and was filled in as part of some kind of railway work.  A National Disaster if you ask me!!!  Anyway… the Cavern was rebuilt with many of the original bricks and to roughly the original layout in approximately the same place.  So you can now go to the Cavern as a Beatles fan and pretend to let its atmosphere wash over you.  I was genuinely surprised at how much of a “gigging venue” this place actually is.  I want to play there.  Ha ha!  You get that feeling of cramped conditions and sweat dripping off the ceiling.  You can almost imaging the Beatles playing there.  When I walked in I was amazed at how deep down into the ground you feel you’re going.  Some guy was on stage playing Beatles songs to anyone who shouted a song title out.  I was actually pretty impressed with him. Good luck… whoever you are. Here’s a (very) short video:

The original entrance to the Cavern still exists:

As I said at the beginning… I shall hold a bit back for future artwork… but I hope you got a taste of Liverpool.  From my experience, a city that is still very proud of the Beatles.  In fact, if they’re going to have a museum dedicated to the city then they’d better find something other than the Beatles to put in it.  The city seems to exist in the shadow of the Beatles… and what a fantastic shadow that is!  🙂  Thanks to Ioanna and Pete for their amazing knowledge of the city!

2 thoughts on “The Liver Birds”