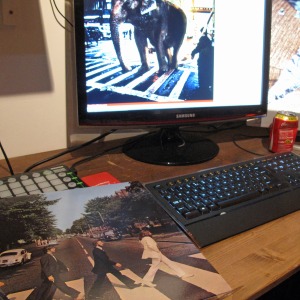 Still a lovin’ the vinyl.  I’ve just stuck on Abbey Road.  Thought I’d type while I listen.  I do love Come Together.  For me an example of why Ringo Starr is one of the greatest drummers of all time.  A very much underrated musician and the butt of almost all Beatles-related gags.  But anyone who’s anyone appreciates Ringo’s contribution.  Understated and sublime.  I’ve always been a fan of the drums… I think my own music is dominated by the drum kit and the ‘sound’ of the drum kit.  I don’t think songwriters pay enough attention to drum patterns.  They are often happy enough to just put some chords over a drum loop.  That may work just fine for dance music… but if you’re trying to capture the attention of a headmusickid you have to give them something that excites!  I remember first hearing the Buzzcocks… specifically the Peel Sessions album.  Fantastic drumming. Likewise when Caught by the Fuzz by Supergrass first slapped me square in the jaw.  The drums can not only ‘make’ a song but they can define a band.

On a side-note… what the hell was McCartney thinking when he followed the monumental Something with Maxwell’s Silver Hammer?!?  Honestly… sometimes I despair.  I will often be heard sticking up for Macca… but I can think of nothing positive to say about this bloody song.  Abbey Road is such a HUGE album… there is no place for Maxwell’s Silver Bloody Hammer.  Even if the sodding hammer was made out of solid gold I still wouldn’t allow it to occupy the same air-space as the rest of Abbey Road.  Ha ha!  Conversely by the way, I don’t feel the same way about Octopus’s Garden.  Caught you by surprise there?  Anyway… Macca kind of makes up for it immediately with his magnificent vocals on Oh! Darling straight afterwards.

So… the drums are important.   As I was saying.. they can define the band.  I think Ringo’s drumming was the perfect accompaniment to the twin colossus of Lennon & McCartney.  It wouldn’t have worked with John Bonham bashing away behind them.

I Want You.  What a song.  This song is so heavy (very much reflected in the lyrics which proclaim how heavy she indeed is!).  So… we know she’s heavy!  Ha ha!  I love how far the Beatles took music in their short time as an entity.  They redefined music in the space of seven years.  They wrote the rule book on rock and roll and then created the concept album.  They were a band poles apart with itself.  Then on Abbey Road, their final album, they looked back at everything they had ever been and took it to a new level.  With a song like I Want You the Beatles are almost heavy metal.  They had achieved a similar (if not heavier) sound before with Helter Skelter… but I Want You repeats like a heavy rock mantra.  Such a simple song.  Repeated ad infinitum.  Amazing vocals.  Creative bass.  Smashing drums.  A band at the top of its game and yet at the end of its game.  A band that wrote Revolver and Sgt Pepper and yet ended with the relative straight line of Abbey Road.  Awwww…. just listen to that distorted ending… something I have actually (unknowingly, but now I recognise the theft!) incorporated into the latest Eleventh Hour Initiative song.  Oh well…. Imitation is the sincerest form of flattery and other such clichéd jargon!  Ha ha!

The needle spins in the centre groove.  I have to turn the record over!  Oh come on… even that is nostalgic and sugar-coated sweetness! 🙂

George’s second song on the album.  Here Comes the Sun is another sure-fire hit.  I’ll tell you something – people will decry George’s involvement with the Beatles’ songwriting.  George himself liked to joke about it.  When Paul suggested they write together in later years George stated “He ignored me for years and now he wants to write with me?”.  Well, honestly, don’t believe a word of it.  Count the number of Harrison’s songs on albums like Revolver and Abbey Road.  I think he fared pretty well.  In terms of talent he was certainly up there with Lennon and McCartney.  He made the Beatles the band they were. I have the utmost respect for George’s contributions.  It’s funny that Sinatra introduced his version of Something with the line “This is one of the best Lennon and McCartney songs”.  Ha ha!  I bet George had to eat a couple of extra portions of Ready Brek that morning!!!

Hmmmm… typed right through Because.  And to think I could have waxed lyrical about the vocals on that track!

So… we’re now into the medley on side 2 of Abbey Road.  The opportunity for all the songs that had never been completed to be tossed into the salad bowl and hand mixed with some expensive olive oil.  I think the medley works a treat.  In fact there are moments that blow my mind.  The beautiful vocal harmonies.  The intricate Albatross-esque guitar work.  The in-turns eloquent and silly lyrics.  And the overriding feeling that everyone involved knows that this is the end.  The last notes they will ever record as the Beatles.  The fab four’s intentions have already been spelt out.  They are gone.  They have left the building (without Elvis’ blessing contrary to the reports!).  And yet Paul, John, George and Ringo were friends for one last time to create this album.  That is how it sounds.  The work of friends.  That is why I think Abbey Road occupies a certain position in fans’ hearts.  This is the album as we want to remember the fab 4.  For so soon after the final note is played there is acrimony at play.

She Came in Through the Bathroom Window.  Another silly McCartney song… but this one feels ‘right’.  This is class… and we sense we are on the wind down.  Into Golden Slumbers.  I love Paul McCartney.  Just listen to that melody.  Just listen to that voice.  Honestly, some of his best singing.  Some of the best ever singing.  Lennon gets the plaudits, but McCartney was up there.  Lennon may get voted “Best Singer of All Time”… but I won’t forget Paul.

A drum solo!!!  I can forgive Ringo’s “Peace and Love” bullshit for this one perfectly played solo.  His only solo.  Okay, perhaps it’ll take a little more to completely forgive his recent antics… the bloated old rock whore that he is!  😉 And… then… a guitar solo battle!!!  This is the Beatles soloing like things possessed.

I love the Beatles.  I think I’ve just written a pretty little love letter to my favourite band.  And it took the exact length of Abbey Road to write because Her Majesty finishes… … now.  Even the sound of the needle spinning endlessly in the groove sounds musical to me.  I could have written more if I had more time… but I think I got my point across.  Perhaps I should do this more often.  Write whilst listening to a record?  It would mean all my articles would have to be written in the space of approximately 30 minutes.  Ha ha!

*Apologies for any factual inaccuracies.  I have written this whole article in the time it took Abbey Road to spin… and I didn’t refer to the likes of Wikipedia once!  This is all my inherent knowledge on display.  I am showing you just how much of a Beatles fan I am… (and how quickly I can type!).  And relax.

One thought on “Abbey Road – An Impromptu Review”