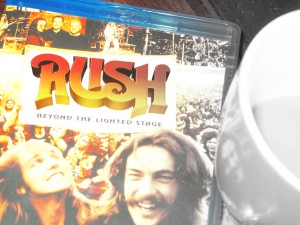 I love watching band documentaries and I’ve really been filling my boots recently.  Here’s one I enjoyed.  ‘Beyond the Lighted Stage‘ brings the career of Canadian band Rush to life.  Let me just (perhaps sadly, perhaps not?!?) admit right now that I have never been a Rush fan.  In fact, it’s a credit to the film that I now just might seek out a few Rush albums.   Well… ’70s albums.  No matter how good this documentary, I’m still to be convinced about the ’80s synth albums!

So… this is a review of a Rush documentary by someone who knows nothing about Rush.  Okay…  I knew they were a prog rock band.  I knew the individual band members’ names.  I knew Geddy Lee had a big nose and could play incredible bass.  I thought Rush were a pretty light, keyboard-centric rock band.  But I honestly hadn’t really heard anything by them.  There were a couple of occasions during the documentary where I had moments of song-recognition.  But on the whole… nothing.  So am I the ideal, or worst person to comment on this film?  Hmmmm.  I think I might just be perfect. 🙂

There’s certainly an unusual amount of ‘home-filmed’ archive footage.  This lends an essence of authenticity to this documentary above and beyond the usual cash-in.  I should Wikipedia why and how some of this footage exists… that would be the right sort of thing to do when writing a review.  But, as a friend of mine said recently after making a truly bizarre sweeping statement.  – “Life’s too short for research”.  Ha ha!  Anyway… you don’t want Wikipedia’d nonsense.  You want my honest, expert opinion.

The first think that hits you in the face is the sheer level of musicianship on display in this band.  The three members are superhuman.  Geddy Lee, on bass, is an animal.  Basslines that make me re-evaluate what breakfast cereal I eat in the morning.  In fact… I actually eat breakfast cereal last thing at night.  So I actually eat supper cereal.  Hmmm.  …and his vocals, while not quite to my taste, are undoubtedly superb.  Alex Lifeson must be one of the most underrated guitarists of all time.  I have been a fan of the guitar, and the guitar hero, all my life and yet I rarely see Mr Lifeson make an appearance in any top-ten lists.  Well… I tell you… Alex Lifeson has some chops.  Oh yes… he has a whole butcher’s shop full!!!

I used to read ‘Rhythm‘ magazine at my old drummer’s house.  It’s not a porn mag… it’s a mag about drumming!  Neil Peart was a regular in the pages of that magazine.  So I have more knowledge of the type of drums Mr Peart uses than the average man on the street… and yet I still hadn’t really heard him play.  Well… let me say now that he certainly lives up to the reputation of ‘consummate drumming professional’ – ‘The Drummer’s Drummer’.  Amazing tom rolls that remind me of Maiden’s Nicko.   And above all, a well-read drummer who writes the band’s lyrics.  Bats away the drumming clichés!  So…. huge Kenny Everett thumbs up to the musicians of Rush.

Elements of the narrative of Beyond the Lighted Stage chime with my own life.  There’s a discussion of how ‘local’ bands were ignored by the locals (essentially Canadian bands in Canada). American bands would play Canada… hear Rush, and think they were the greatest thing since sliced bread.  The locals of course still thought “but they’re just a local band”.  People not seeing the bigger picture.

I used to play in a band that would routinely blow signed, touring bands off the stage.  They would genuinely approach me afterwards and ask what record label we were signed to and where we were playing next.  I would answer “we’re not signed”… and watch their jaws drop.  That’s ‘local band syndrome’.  It’s like a disease.  But the cure for this disease is building up enough of a following that the generals in charge of the ‘power of music’ can no longer ignore you.  This, unfortunately, is trickier now than ever before.  I once watched an interview with someone… I can’t remember who – some old rock star… and he said that if you formed a band in the ’60s and played your instruments relatively well…. you would be signed.  You would be famous.  This is no longer the case.  If watching these band documentaries tells me anything it’s that the game has changed completely.  It will be interesting to watch a documentary in 20 years time about a band making it big today.  The documentary will probably feature more about social networking, public relations, home recording and luck than it will licking Jack Daniels off a hooker’s tits in a LA studio.  Horses for courses I suppose.  It’s just a shame my ‘childhood’ memories of great rock are being struck over the head with a shovel and buried along with all the great albums.

This documentary, ‘rock’umentary if you will… shows Rush veering into Spinal Tap territory on more than one occasion.  They are obviously highly aware of this as I’m sure I spotted a tiny Stonehenge monument perched on one of Geddy Lee’s keyboards.  The usual ‘talking heads’ pop up to offer their ‘expert’ opinion… but it’s nice to see a few more unfamiliar faces (and no Lars Ulrich!).

Beyond the Lighted Stage is an excellently edited and expertly put together film.  I’ve seen some pretty muddled and amateurish efforts in my time and this isn’t one of them.  At times it is a window into the world of the care-free millionaire musician – but there’s enough heartbreak featured to bring the brick of real life careering towards that fragile glass.

Verdict.. I have been won over by the entity that is Rush.  I enjoyed this film.  What more is there to say… it’s nice to see three ‘normal’ blokes who make excellent, technical music.  This is not a film of sex, drugs and rock and roll.  This is a film of oxymorons.  A band with adoring fans and the wealth, fame and ability to do whatever they want in life.  A band that is completely unknown to the population at large.    Alex Lifeson sums it all up beautifully “A million monkeys typing on a million typewriters may eventually produce the complete works of Shakespeare.  But who the hell’s going to clean those typewriters?”.  Geddy Lee: “We’re getting into a weird area here… monkey defecation.”