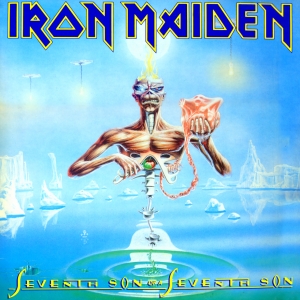 I was at school.  A friend in my class suggested I listen to Seventh Son.  I think his sister had bought it.  I actually bumped into that friend relatively recently after not having seen him for twenty-odd years.  We exchanged pleasantries.  I didn’t remind him of his album recommendation.  He probably wouldn’t have remembered and I’d have just felt stupid.  Besides, it wasn’t an important moment for him.  It was nothing for him…  but eventually everything for me.

Seventh Son of a Seventh Son is an album I have wanted to review and ‘push’ on other people for a long time.  However I could never find a reason.  A ‘review’ of this album would seem a little ‘out of nowhere’ and unnecessary.  But today I just read a tweet mentioning that the album is twenty-five years old.  So why not!

SSOASS (see what I did there!) is Maiden‘s seventh album.  It kind of ended a run of ‘classic’ albums.  Starting with the Di’anno sung Iron Maiden and Killers through the ‘classic period’ albums including Powerslave, into the slightly tired Somewhere in Time.  Each of those albums warrant thousands of words in their own right.  But safe to say that Iron Maiden‘s album, tour, album, tour, album, tour schedule had left the band a little burned out by the late eighties.  All Maiden fans have their favourite album and their favourite period.  Many will in fact cite Somewhere in Time as the best album – that’s the power of Maiden.  For me however, that sixth studio album got a lot of things wrong.  Of course, I come to all these conclusions in hindsight.  SSOASS was my first Maiden album, my introduction – bought on cassette!  Therefore the very first thing I ever heard by Maiden was the acoustic intro of this album.  Very, very unrepresentative of Iron Maiden.  But there you go.  That’s life!

Thinking back, what first struck me was the ‘weirdness’ of Bruce Dickinson’s voice.  THAT vocal!  That strange, effortless vibrato.  Remember, I was coming from a position of listening to A-ha.  Actually, that’s a bit disingenuous.  I wasn’t really into music at all.  In any case, A-ha were great!  They will probably get a ten thousand word essay from me at another time.  What was I saying?  Yes… Bruce Dickinson’s voice, to the uninitiated is something to be pondered.  But once you’ve taken it in you just have to appreciate the sheer wonder of it.  His voice is an instrument.  Yes, I know a lot of people SAY that.  “My voice is an instrument.”  But, really, that’s bollocks.  Dickinson’s voice is the real deal though.  Just listen to this album.  It is a marvel.  The eighth wonder of the modern world.  Now, during live performances around this era (the Maiden England gig/video for example) Dickinson’s voice was shot.  Totally ripped to hell.  But on album he was still a god.

And your trip begins…”

Moonchild, the first track on the album, kicks in.  A magnificent opening.  A great showcase for the epic bombast of the frowned upon power chord.  When Dickinson enters with his first words he pierces you to your heart.  He growls, and yet has a crystal clear voice which could shatter a chandelier.  Moonchild, based on the works of Aleister Crowley gives you a taste of what to expect from this album.  This is a work laced in mysticism and witchcraft.  If you like Hammer Horror (I do!) then you’ll love this album.  This is a concept album.  Yes, I know, the songs don’t necessarily tell a complete story.  But it is a concept album.  There is a consistency.  It’s like the argument as to whether Sgt Pepper is a ‘concept album’.  What is a concept album exactly?  Well, if the songs flow, and feel connected then that is the concept right there.  Feed the donkey.

Bruce sounds deranged.  He cackles.  Before we know it we’re listening to Infinite Dreams.  This is one of the first songs I ever learned on the guitar and I can still play it to this day.  I can also sing it absolutely off by heart.  I can recite the lyrics word for word, even after years of not having listened to it.  Great lyrical lyrics.  This isn’t an album to play in your car while you make the suspension go up and down at the traffic lights.  This is an album to learn from.  Does anyone still appreciate that sentiment?

Adrian Smith’s guitar playing on this album deserves a special mention.  He actually became so disillusioned he ended up leaving, but here, he sounds great.  He always brought something else to the party.  Dave Murray’s signature ‘ultra-fast-widdle’tm may be the defining feature of Maiden’s music, but Smith brought some thoughtful, technically precise playing to the forefront.  He was later replaced by the opposite kind of guitar player in Janick Gers – but, again, that’s a subject that warrants its own dissertation!

Can I Play With Madness?  Maiden‘s best hit single?  Maybe?  No.  It is.  Fact.  Forget Bring Your Daughter to the Slaughter.  I’m still embarrassed about that song even now.  Mention Iron Maiden and the ‘common person’ will think Bring Your Daughter to the Slaughter.  Arrrghh.  I could pull my hair out I really could.  Please understand, there’s nothing necessarily wrong with BYDTTS (see what I did there again! 😉 )… it was a song written by Dickinson for A Nightmare on Elm Street.  It was a solo track.  It was supposed to be a ‘funny’ song for a silly horror film.  But apparently bass player, Steve Harris (Harris IS Iron Maiden) heard it and thought ‘I want that for Maiden‘.  Now, when it comes to Maiden, Harris is rarely wrong.  That is how they became the best  Heavy Metal band in the world.  But this decision was wrong.  BYDTTS should never have been a Maiden song.  It has made it difficult for me to talk in a serious manner about them ever since.  Honestly… kids at school mocked me.  Members of my own bands laughed at me.  It did Maiden no favours… yes, yes, apart from a number one hit single.  So, again, where was I?  Oh yes, Can I Play With Madness?.  Yes, a great single.  Quite unlike Maiden to start a song with a burst of the chorus vocal.  They must have been aware of the significance of this song even as they were writing it.  I love the song.  I hear new things in it all the time.  Layers of sound.  The whole album is like that.  Layers.  I would say like an onion… but what does that really mean?  Perhaps if an album made your eyes sting you could truly draw the comparison.

The Evil That Men Do.  Great intro guitar line.  De de de.  Nicko McBrain’s right foot on that bass drum pedal.  Awesome.  One of the greatest drummers of all time. Another galloping beat, a stampeding bass.  More of Dickinson’s growl.  Then into the chorus where Dickinson displays his famous ‘air-raid siren’ voice.  Another song that I love and admire.  The lyrics are just superb.  The lyrics throughout the album are intelligent and memorable.  “The evil that men do lives after them; The good is oft interred with their bones.”  Shakespeare.  Maiden are the most well-read of bands.  Sometimes too much so.  After reading a book, Steve Harris seems compelled to write a bloody song about it.  This habit has had a few embarrassing results.  A few horribly drawn out, meandering ‘epic’ songs.  But not here.  No no no.  The title track is the defining moment of the album…

Seventh Son of a Seventh Son.  Okay, Iron Maiden had pulled off epic before (just listen to Rime of the Ancient Mariner), but with this song they cracked it.  Totally blew the opposition away.  A band at the very top of their game.  Perfect instrumentation, perfect singer, perfect theme, perfect lyrics.  Bruce gets to do some of his best “ooooooooohs” in this song.  He gets to play his ‘characters’.  He gets to sound evil.  But, here’s the amazing achievement – it all sounds so clean!  This is a heavy metal band pulling off bad-ass imagery.  A group who have pounded the world and been responsible for some of the greatest British rock music.  But this song is clinically polished.  Not in the negative way the word ‘clinical’ is often meant.  This song is like a surgeon’s blade.  It will cut you.

“So it shall be written

So it shall be done”

Choirs.  Well, synthesised choirs.  The ‘choir’ keyboard preset that Maiden used then and have continued to use ever since is just fabulous.  Yes, it’s dated, but screw that – it’s just ‘right’.  Enter guitars steeped in delay.  This song IS epic.  If you ever have to explain to someone what an ‘epic’ song sounds like then just play them Seventh Son of Seventh Son.  Job done!

More acoustic guitars.  The Prophecy.  For me, the weakest song on the album.  But its redeeming features are just so totally redeeming.  This ain’t no Maiden filler as found on some of their other albums (and come on, they all had them… be it Gangland, The Duelists  whatever), this is another great song.  The beautiful, windswept, woody, earthy guitar outro is worth the price of admission alone.

Then we have the Clairvoyant.  A typically ‘clunky’ (and I’m specifically referencing the ‘thwack’ sound Steve Harris achieves with his fingers) bass intro.  Then more tight, thunderous power chords.  Cue one of the most uplifting guitar melodies you’ll ever hear.  Dickinson is all-powerful here.  Emotional, almost spoken verses combine with operatic sections to produce another highlight of an already brightly lit album.  Superb end to the song.  The transition to the next song is perfect.  You can imagine the band standing in the studio twenty-five years ago nodding their heads in approval.  This album was recorded in an era when the album was still king.  And there was still a place for an almighty prog rock concept album.

Only the good die young is a phrase I have often used.  I only have to watch the news on TV for a few minutes before you’ll find me uttering those words.  Another great song.  Mighty fine interplay between the guitars and the vocals.  And a rock ending!!!  Yeah!

Seven are your burning fires

This album, for me, is Iron Maiden‘s finest hour.  That’s not to say their other albums weren’t also great.  I think your favourite album by a band depends very much at what point you joined the party.  I love the music on this album.  I think the artwork is fantastic.  For me the music from this album will always sound ‘light blue’.  Is there anyone out there who knows what I mean?

Maiden probably had more important albums.  The Number of the Beast is likely their defining album.  A Matter of Life and Death is as consistent and epic.  But Seventh Son of a Seventh Son is the Maiden album I would take to that desert island that we sometimes consider retiring to.  If one more person on this planet listens to this album because of this review then my job here is done.  I thank you.  Oh, and… ten out of ten.