I proudly unveil a new Eleventh Hour track.  This song is a slight departure in the way it is skewed a tad towards the lord of the dance – but give it a listen… it has all the hallmarks of the Eleventh Hour.  This tune punishes.  Pure, unadulterated energy – a necessary contrast on an album that is shaping up to be chocker block full of hits!

Was taken out by my auntie and uncle today.  Had one of the best meals of my life!  Seriously impressive! 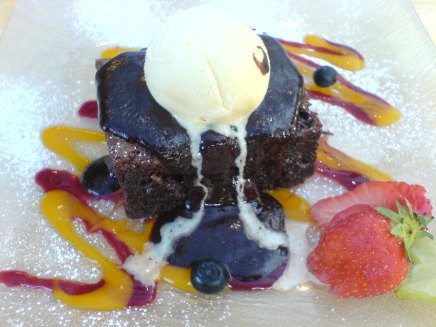 Great food.  Then came home to finish the mix of Feel.  It has been a good day.  The Eleventh Hour album is now 9 tracks long.  I have it playing as I type this and it sounds like a greatest hits collection!  Ha ha!  I know – I’m full of it!  Well… literally actually.  Completely bloated.  I forgot to take a picture of the starter but it was a homemade fish cake with Hollandaise sauce.  Really scrumptious.

I’m really accomplishing things this year.  2010 will be a year that sticks in my head.  I can for various reasons remember likewise 1995, 1997, 1998.  This year will be the year that I nearly completed an album start to finish.  Also, not just any album… but an album that is wrapping up a love of music and delivering it to anyone who wants to listen with a hug and a kiss.  I am flowing, embracing the moment, producing a stream of music.  It has helped greatly that Bill has taken some of the weight off my shoulders lyrically, but I am also expressing my feelings through the music.  There is joy in some of these tunes.  And gold in them there hills!

An accumulation of all that I have heard and all I have experienced.  There has been no need to jump on any bandwagon or pay any attention to the current fad.  I am just giving you my heart and my soul (knowing wink to any Mitchell and Webb fans out there!).  This music is proving to be so original.  I have, in my own humble opinion produced a few classic tunes over the years.  I would place Out of the Low Times and Purple Planet Place right up there.  My lyrics to an old song called Feeling New also bring a tear to my eye when I hear them.  But this new collection of songs – this new Eleventh Hour album is just something else.  It is exciting.  It rises above the mire.  There’s no Oasis clone here.  No-one’s trying to be the next Kaiser Chiefs or Arctic Monkeys.  There’s no Dubstep going on.  These songs have no interest in whether Cher or One Direction win X-Factor.  These songs stand alone.  I give them my total and utter respect.  The best music of my career.  And I have in Bill perhaps the best lyricist in the world.  Now, as I’ve said before… I believe that when I want to, I can write a lyric as good as anyone – but with Bill on board I don’t have to.  I can put emotion into the music.  Emotion is something that can be lost in the modern era.  Seriously.  The everyman out there probably doesn’t realise how soulless music production has become.  We’re not talking about the Beatles recording a whole album in a day anymore.  Or Led Zeppelin knocking their debut off in 30 hours.  Modern music production is a machine.  In fact, while you’re reading the next paragraph stick on Pink Floyd‘s Wish You Were Here.

Okay, (hopefully Welcome to the Machine is now playing in the background) modern music production is a machine.    Watch old documentaries on Abbey Road with the Beatles messing around, or Jimi Hendrix recording anything.  Beautiful era.  I didn’t live through it… but like many of my generation we have grown up listening to a lot of Beatles and Stones.  Those documentaries are what we got into music for.  Well… let me tell you… it’s all gone.  We live in the Pro-tools/Logic age.  For those of you who don’t understand I can put it simply:  Music is now made just as you would type a Word document.  Music is recorded into a computer and displayed on the screen.  You can then cut and paste to your heart’s content as quickly and easily as a student cheating with his essay!  This whole process has made music as sharp as glass.  You can cut yourself on the cleanness, the precision.  But the side-effect is that it is a little too tidy.  Like a really annoying neighbour’s front lawn!

Well… I have produced a collection of songs in my little studio that I feel knocks aside this assessment of modern music production.  I have my own style.  I reckon I can call myself a “Music Producer” now.  My songs have warmth, vitality and intensity.    I’m perfecting the wall of sound that I have been building for years.  Unlike me today, my wall of sound is not a bloated beast.  It is full, yet nimble.  And so endeth my rant about whatever I’ve been ranting about.  I wish you all a full, yet nimble week!